Suzuki is one of the biggest automakers in Pakistan offering a variety of vehicles ranging from Hatchbacks to Crossovers. The company undoubtedly has a huge consumer base in the hatchback segment. The popularity of Suzuki Mehran in the country was without a doubt unparalleled compared to other hatchbacks despite the car being obsolete and outdated.

Both the used and new cars of Suzuki have high demand in the market due to a lack of serious competition in the market, consumer trust, and large dealership network. Here in this article, we will be writing about used Suzuki cars that you can buy for under half a million.

First on the list is Suzuki Baleno. The company introduced this sedan in the market when it decided to halt the production of another sedan in its lineup which was the Suzuki Margalla. Suzuki Baleno came with either a 1300cc or 1600cc engine mated to a manual transmission. The car was a new addition to Suzuki’s lineup at that time and was thought to be a game-changer for the company and the local auto industry. Baleno was introduced back in 1998-99 in the country and after a few years it got a facelift.

Globally, the car was introduced in 1995 with different nameplates in different car markets. The vehicle gave good competition to Honda and Toyota cars, however, due to some issues such as low ground clearance it couldn’t last long in the market. Despite that, the car performed well in its production days.

You can buy a 1999 Suzuki Baleno on OLX for under half a million rupees.

The first-generation Suzuki Cultus is one of the most iconic cars of Pak Suzuki in Pakistan. It could easily be said that this was one of the hottest selling hatchbacks in the country when it was in production. Suzuki Cultus came in three different variants: VX, VXL, and VXR. The hatchback came with a 1000cc engine coupled with a manual transmission. The company made some minor model changes to it in its whole production life. However, the overall look of the car remained the same.

It is important to note here that the car was launched with a traditional carburetor engine which was replaced by an EFI engine in 2007 and in 2012 the company finally equipped the car with a Euro II engine to make it more environment friendly and fuel-efficient.

The car amassed huge success due to its low maintenance cost, good fuel economy, and the easy availability of spare parts which is due to Suzuki’s large dealership network. Suzuki Cultus is still a hot cake to buy as a used vehicle and if you have made up your mind to purchase the car you can easily get the 2004 model of Cultus on OLX for under PKR 5 lacs.

If you have a big family and want to get your hands on an affordable used MPV then Suzuki Bolan VX is the best option for you. It can seat many people and if you have a delivery-related business it can be used for that purpose as well.

The pickup comes with an 800cc engine mated to a manual transmission. The mileage of the vehicle varies to the load it carries, normally it gives 13-15Km/l. There are no state-of-the-art features in the pickup and it is very simple from the outside as well. People have often modified it according to their taste and liking. New competition has diminished its popularity, but it is still being traded in the market.

You can buy the 2004-2007 models of Suzuki Bolan VX on OLX for under half a million rupees.

Any used car buying list cannot be completed without the mention of the Suzuki Mehran in it. The car is one of the most iconic and hottest selling vehicles in Pakistan until recently when it was discontinued by the company after three long decades.

Despite being discontinued the car is a hot favorite among students and middle-class families. It can easily be regarded as the national car of Pakistan.

If you have made up your mind about buying a used Suzuki Mehran then you can easily get 2005 and below models of Mehran on OLX under PKR 5 lacs. One of the most critical and harshest criticisms of the vehicle was that it lacked basic modern and safety features such as power windows, airbags, etc. On the contrary, people have remained loyal to it due to low maintenance cost and resilience.

The 1000cc Suzuki Alto is another great option for people looking to buy a good used car. Alto was launched back in 2000 and got only one facelift in its entire production span. It came in two different variants: VX and VXR.

When the craze was on the rise to fit CNG kits with the cars, the company grabbed the opportunity and launched the CNG versions of VX and VXR. A great move at that time, however, due to CNG the power of the car diminished.

Just like other economical or budget sector cars, the exterior and interior of the vehicle are pretty simple.

You can purchase the 2007 and below models of Suzuki Alto on OLX for under PKR 5 lacs.

Well, now we have the Suzuki Khyber, another Suzuki car option you can opt for. The shape and size of the Suzuki Khyber are somewhat similar to that of Suzuki Cultus. It was actually on sale before Cultus hit the local market. The car comes fitted with a 1000cc engine along with a manual transmission.

It has ample interior space that can accommodate up to 5 adults. You can get 1998 and below models of Suzuki Khyber on OLX for under half a million rupees.

Again, if you are not into used hatchbacks or have a large family then there is Suzuki Margalla for you. The sedan is equipped with a 1300 cc engine mated to a manual transmission and comes in three different variants.

It lacked modern features, but still it is a choice you have in the used sedan segment. You can purchase the Suzuki Margalla on OLX for under half a million rupees– the model would range from the year 1995 -1997.

We have listed all the options from sedan to hatchback to pick-up so that you can easily find the car you like. Do drop your comments, thoughts, and suggestions in the comments section below. 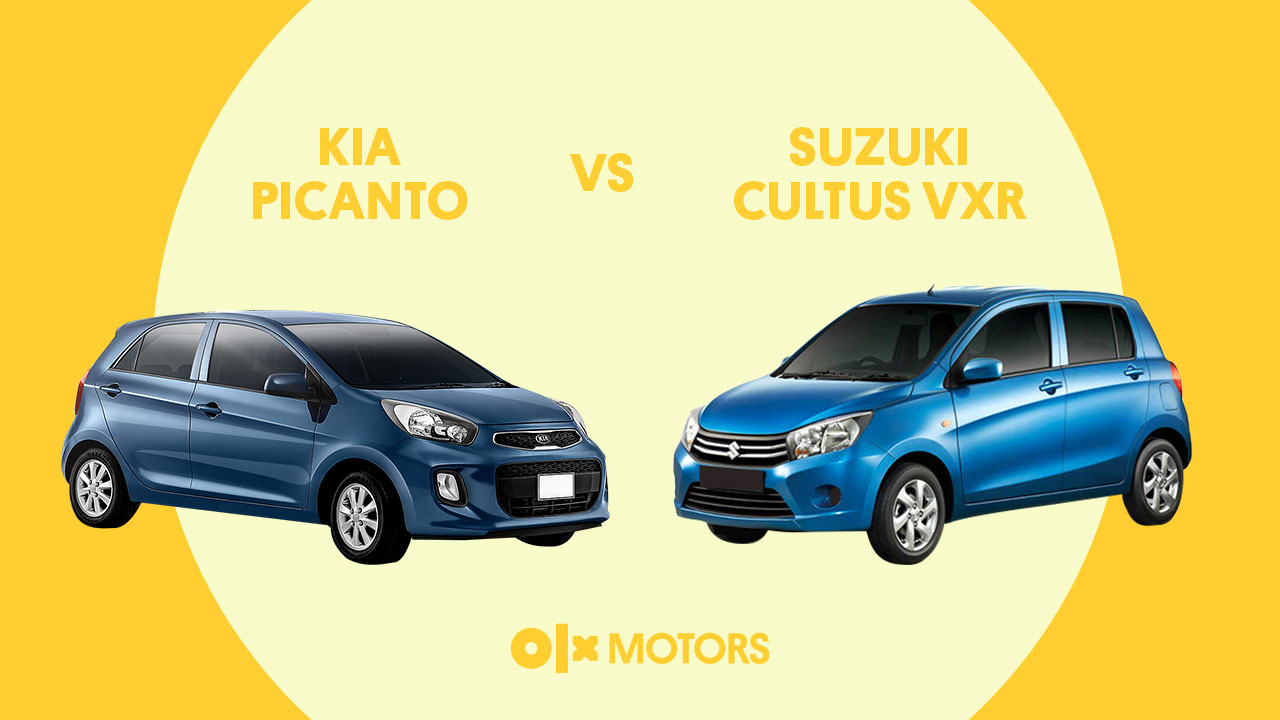 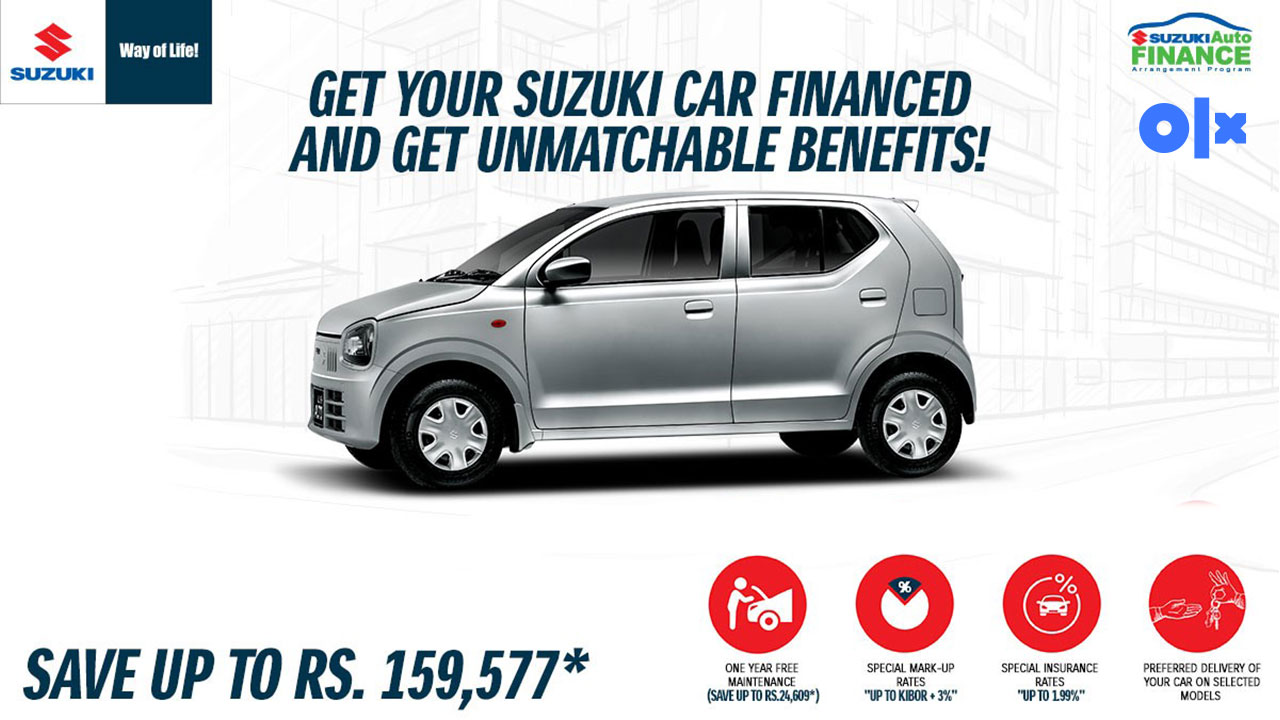 Buying a New Car Made Easy By Car Financing Modules 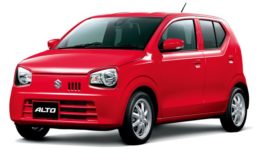 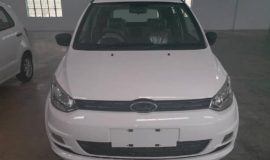 Bravo to be launched in Pakistan by United Motors